Dreaming Does Get You Places

When I first fell in love with kizomba, I thought up this hair brained scheme that was much like a Lindy Hop Camp experience that changed my life.

This past weekend, my dream just came true and the reality far exceeded whatever I could dream up. It was perfect: the people, the teachers, the energy, my learning and growth and so much I can't even express it well. I can only share my thanks and let things simmer and unfold over time. 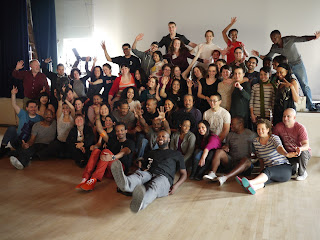 This picture barely touches the surface of what I experienced this weekend and its missing some people that had to leave, but it does convey some of what happened as well as show you the faces of some of the people that were a part of Seattle Kizomba Semba Camp 2013.

Many thanks have already gone around and the warmth from the weekend still emanates from the various post and pictures that are being shared as the week unfolds.

I know the weekend wasn't perfect for everyone but I think everyone was able to get something out of it, at the very least some new friendships and lasting memories.

So, here, very briefly are my thanks:

To the teachers that came and took a chance on my crazy idea, embraced it and joined forces to make an incredible team: Oscar, Eddy and Riquita, much thanks and love - you have impacted so many people this weekend, I am so happy to be a part of that.

To my volunteer team and hosts who opened their homes and gave their time and energy to making the weekend a success, thank you for making my dream run so smoothly.

To my Seattle (and neighboring cities) Kizomba family and friends, you are as always an incredible group! Everyone that comes here loves their stay because of who you are and how welcoming everyone is. Thank you for keeping our spirit like a family with so much welcoming warmth.

To my new kizomba family from all over the US, I am so lucky that you decided to come and be a part of this weekend. Now I have faces to names and more connections and fun to be had because I know we will see each other again sometime soon!

Here's the link to the photos from the weekend. Check it periodically throughout the week, I'll be updating a little at a time.

One More Day til Camp and Updates to Weekly Events

Here we go, one more day till Seattle Kizomba Semba Camp kicks off! Instructors will be in Seattle by tomorrow (Thursday) and the opening dance will be in the Main Ballroom of the Century Ballroom on Friday, March 22, 2013 at 9:30pm. See you there!

UPDATES on Weekly Events:Monday night Salsa/Kizomba/Bachata with DJ Nick will now be at Cellar's on 2132 1st Ave. in Belltown from 9:30 pm to 2:00 am (No Cover).

UPDATES on Workshops:
Mafalda will be back in Seattle with DJ Raul Adon on May 8th (details here). Registration will be available soon through the Century Ballroom.

Posted by Kizomba Seattle at 5:42 PM No comments:

Some Changes in Weekly Socials

A quick announcement to let folks know about some changes:

Monday at Limelight: Limelight is changing ownership and the last social dance will be on Saturday, March 16, 2013. This means there will no longer be salsa/bachata/kizomba playing on Monday nights. SeattleLatin Dance (Becka and Nick) are looking for a new home for that night so please stay tuned.

Tuesday Kizomba Practice: Practices are still being held at the Belltown Ballet and Conditioning Studio from 9:30 - 11:30. New venues are being reviewed and researched so that the practice can start earlier. In the meantime, please continue to support this weekly practice and come and work on what you learned in class or just to dance.

On another note... Seattle Kizomba Semba Camp is only 7 days away - whohoo!

Right now we have a total of 56 registrations. There are still some spots left - please check the Seattle Kizomba Semba Camp site for more details and the latest on schedules.
Posted by Kizomba Seattle at 6:47 PM No comments:

Back from Another Stellar Kizomba Weekend

Usually coming back from a weekend festival leaves a void - I go through festival withdrawal, especially when its was a FANTASTIC one. This time though, its not so bad because I know that in another two weeks, I'll be a part of another stupendous weekend: 3 nights of dancing, 2 days of workshops with 3 great instructors (Seattle Kizomba Semba Camp March 22 - 24, 2013).

The 4th and final Vancouver International SalsaFestival (VIS) was memorable in so many ways - not the least of which is that fact that there was a full day kizomba track with Kwenda Lima, Albir and Sara as instructors, a dedicated bachata/kizomba room for most of the weekend and a kizomba only room on the last night. I spent most of my time in the kizomba room and though I felt like I was cheating a bit on my salsa love, it was well worth it.

We're on the crest of a growing kizomba wave and I'm so thankful to be a part of it and to influence what I can here in the Seattle and where ever else that ripples through to. This time last year, I was starting by bringing Joao and Mafalda to Seattle. At the time I was surprised by the number of people that came to attend that workshop in March 2012. This weekend was epic, and the beginning of more epic-ness through till now.

I also have to give a shout out to Kizomba Seattle crew (not just the crew from Seattle but also the Vancouver family that was there with us from the start). So cool to see how we all shared our love of the dance - its what makes this dance so lovable. I'd also like to brag about how our guys had receiving lines and little groupies, such a hit! I get to dance with these leads all the time :) Ladies, you were well sought after as well. Go Kizomba Seattle!

We are all still growing and learning together which is what makes this such a great ride. Kizomba bring us all closer - literally and figuratively - to dance, to music and to each other. To walk closely within another's embrace is not as simple as it looks and it is as wonderful as you can imagine when its danced well. The steps are simple, no complicated patterns, requiring that you stay grounded and connected to the floor. As you walk together, you are both balanced, relaxed and listening to each other's movements. When you finally relax into the movement, the simplicity of the steps allows you to focus on the music and let it lead you.

People sometimes think that they need to memorize patterns. In kizomba it is more important to learn how to move and flow with the music. As a lead, to imagine how your body can communicate to your follow, the moves that you imagine from the music. As a follow, to listen to your lead's movements and move as one.

This idea of flowing with the music is really no different from any other social dance that I know. Usually techniques and step patterns get in the way of listening and mapping movement to music. What is unique with kizomba is the simplicity of the steps: it allows you the brain space to listen to the music earlier in your learning. The music also has a base pulse that feels so natural, like a heart beat. The dance brings two people close which can be intimidating at first but if you relax and give in to the flow of each other's steps, it will feel smooth and natural (just like that pulse).

Kizomba also has a way of opening you up as a dancer because of how grounded you have to be in your movement. In order to flow and move with another, you have to know your own natural movement and expression and be able to sense this in the person you're dancing with. I've always spoken about the zen of kizomba and I think this is really the key to differentiating this dance from the others that I love. There is a quiteness in the moment that you step into another's embrace and dance to this music that is can be as warm and as intimate as you would like it to be and and when this happens between you, another person to the music, its just magical.

I have been privileged to see and hear about people blossoming through this dance, to see friendships form, to be part of a wonderful community sprouting up around it and to see other pockets forming across the US. I have met some amazing teachers and made some great friendships. Kizomba is not a dance that will take over other dances, it is a dance that will co-exist with other dances and that's why I think it will be hear to stay.
Posted by Kizomba Seattle at 10:39 PM No comments:

I'll post more on the weekend with Kwenda but a quick THANKS and HUG to everyone that came. It was wonderful to share my Kizomba Zen weekend with you all and Kwend sends a BIG HUG back.

THIS WEEK: Tuesday Practica is NOT at the Belltown Ballet and Conditioning Studio. Please check the facebook page for information.

NEXT UP: VIS 2013 Mar. 7-10, 2013 with Kwenda Lima, Albir and Sara among other things ... This is a weekend of salsa, bachata and kizomba. There's a big crew from Seattle going! This promises to be a fantastic event: performances, workshops and dancing.

SEATTLE KIZOMBA SEMBA CAMP (March 22-24, 2013) is less than 20 days away: 3 nights of dancing, 2 days of workshops with 3 top notch instructors, 1 weekend of kizomba goodness!!! We have visitors from Vancouver (CA), Victoria, Portland, San Francisco, Oakland, LA, Atlanta, DC and Houston already signed up. Don't forget to register and be a part of this wonderful long weekend.

hugs from Belltown...still basking in my kizomba zen and raring to go.
Posted by Kizomba Seattle at 7:13 PM 1 comment: