Get Ready for Oscar BA's visit in May

I know its barely April but time flies!

Check out the details for our May event with Oscar BA and take advantage of early bird pricing.

Hope you're having fun dancing!
Till the next time.....

Posted by Kizomba Seattle at 8:54 PM No comments:

As I'm here with family, missing dancing and thinking about how far things have come, I'm overwhelmed by how much kizomba has grown, not just here in Seattle but everywhere. I wanted to share my experience and  preface all this with a reminder that I'm not alone in my kizomba craziness. This is just my journey :)

This time last year, I was so busy worrying about mambo performances, I barely had any bandwidth to keep up with kizomba. I survived the performance craziness (thank goodness) and took a little break. When I was recharged, I had a crazy thought that perhaps I could go to the source to learn more about kizomba.

It turns out there are lots of congresses to go to... but I was congressed out: from January to March of 2011 I had already been to 5 congresses! I didn't really want another congress. I considered a week in Lisbon but that was just too pricey for me. Then, I found this trip to Jamaica: a salsa - kizomba vacation in Ocho Rios. Perfect! I did what research I could, and tried to enlist some fellow kizomba-crazy people to come with me and in June 2011, off we went.

Not only did we get to meet Petchu and Eddy Vents who are amazing people and a wealth of warmth and information.  We got to learn the basics all over again with them. They shared their knowledge, passion and love of kizomba with us and it was fantastic. I just wished we could have spent more time with them! [NOTE: The rest of the trip and all the other cool folks I met were just as memorable. I'm not getting into those details because I'm focusing on the kizomba part.]

I got back to Seattle with a bit of a conundrum about how to expose more people to kizomba. Basically, there's classes, socials, spreading the music and demos.

There were smaller successes with workshops but in order to get momentum, we had to teach a class series. I wasn't really sure my dance partner amd I were ready to teach a whole series - after all, we are both still learning.

Getting the socials going were hard. There just wasn't enough people to pay for a place and one of the public venues ran out of business. Socials in people's homes are great but not scalable to the general public.

I also wished for a DJ to help spread the music. I met a pretty amazing DJ on the Jamaica trip but he's based in London - it would've been tough to get him here for gigs once a week.

I also needed to work with someone on a demo so we could show people what this dance was all about and hook them in!

So here's what happened in 2011 [and where we are now in italics]:
2012 started off with a bang! Our small practice group (also bachata fans) went to Reno for a bachata festival. There was a Kizomba Jack and Jill on Friday night and guess what? Seattle represented in the Kizomba room! The group of contestants was small but we got validation that the work we had been doing every week was good AND we met others who had the kizomba bug AND gave the bug to other folks. Not only that, we met and learned from Oscar BA and he ended up coming to the Seattle for Flirt (Feb 2012) to teach kizomba. He's coming back to Seattle May for a weekend of workshops!

Most recently, thanks to some key folks (see Spreading the Kizomba Love post), just this month a couple from Portugal came to teach us about kizomba and we had 40 people attending - see some pictures. That was simply fantastic.

I am now on several regional kizomba pages (10 different ones!) on facebook and there are now 2 other socials that are starting to play kizomba music here in Seattle. When kizomba plays, there are more and more people dancing it and more people curious about it. The Kizomba Seattle facebook page now has 255 members compared to barely a hundred early last year.  Not only that, there is now the 1st Zouk/Kizomba Congress scheduled for October in San Francisco and another Bachata/Kizomba congress in NY York in September. Kizomba coast to coast!

I'm still working to grow my knowledge of the dance, to help other folks in the community grow and to help other people learn about the dance. I haven't been alone. Its been quite a journey and I know that there will be ups and downs along the way. I just wanted to take some time to reflect on how far things have come.

It just keeps getting better.

Thank you - or rather  Muito Obrigado ( I hope that's right).

Posted by Kizomba Seattle at 1:02 AM No comments:

I am overwhelmed by this weekend's success!

The workshops with Joao N Rocha and Mafalda Amador were so much fun. I had a blast meeting so many people who are excited about kizomba: a sensual and lovely connected dance from Angola. There was so much I learned: about the dance, about the people that love the dance, about what makes the connection between lead and follow so sweet.

This is a repeat if you're on the facebook page but its worth repeating. Thanks so much to:

You can see more pictures on the Kizomba Seattle page.


Here is a picture from Saturday's workshops. 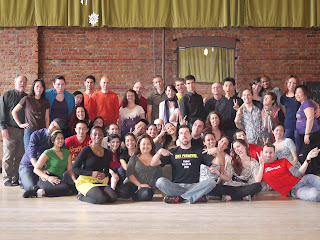 Here is a picture from Sunday's workshops. 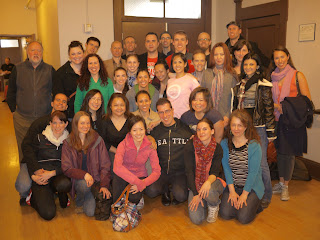 It's almost here! I'm so excited.

Mafalda Amado and João N. Rocha will be in Seattle in 2 days and starting Friday, we'll be dancing a LOT of Kizomba.

You can check out the details on the facebook event  or use the link on the right side of this page.

I hope to see you all out dancing and if you can't make it this weekend, watch out for other opportunities coming soon!

Hugs and have fun dancing!
Frances
Posted by Kizomba Seattle at 3:07 PM No comments: